Navy Ship “Telfair” Was One of War and Comedy 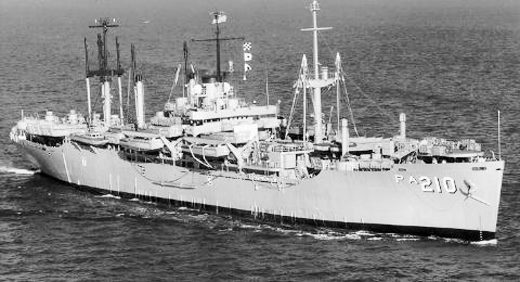 Some things just hide themselves from you for awhile. Although I was in the Navy and was supposed to keep up with such things as a journalist,  I never knew until recently that there was a ship named “TELFAIR.”

About every December 7th I begin thinking of my old Navy days. Not that I was in the Navy that fateful day of Pearl Harbor in 1941 because I was only year old at the time. But I joined the Navy later and we often talked of that “day of infamy” and chronicled it again in the ship’s newspaper. Twenty years after Pearl I was aboard the aircraft carrier, ANTIETAM (CVS-36). Things were relatively tame on the “Flying ‘A’” until President Kennedy and Nikita Khrushchev put the cards on the table over Cuba. Although we were supposedly only a training carrier in the Gulf of Mexico we loaded to the gills with food and fuel and struck out for Cuba on that anxious days in October of 1962. Forty years ago! How time flies.

Nothing was so beautiful as the sight of the shining curving wake from the fantail of that hue ship when we turned her around and headed back north up the west coast of Florida. John Kennedy had called Russia’s hand on the missile crisis. I’m glad he did because all our guns were mothballed. We couldn’t have taken a sparrow out of the skies with those stopped –barrels. It was on this journey that I learned the real meaning of the term “sitting duck.”

Then I found out about the “USS TEFAIR.” Yes, it was a real U.S. Navy sailing vessel – a ship. According to the ship’s history the origin of the ship’s name came from “Telfair: A county in southern central Georgia named for Edward Telfair, the second governor of that state.”

How a ship came to be named for a small county in this part of the state is unknown to me. But I can’t help wondering if Governor Eugene Talmadge of Telfair County had something to do with it. His term ended in 1943 and Governor Ellis Arnall took over in 1944 and the keel of the ship was laid that same year. Usually, if Gov. Talmadge got involved in something, like university system politics, for instance, you heard about it. But I never heard about his influencing the naming of any naval vessels. But he might have.

The little ship seemed to maintain a status of prominence, even back in the fifties: “The USS Telfair was the first US Navy ship to commence one of the greatest humanitarian operations undertaken by the US Navy. It was called the “Passage to Freedom”. The TEFAIR helped Vietnam refugees and others escape that war-torn land. Other ships would follow but TELFAIR was the first in that effort.

And the TELFAIR was a ship of war:  “That evening, just after 1830 (6:30 pm), her task was group was jumped by 10 or more kamikazes. TELFAIR and her sister-ship GOODHUE (AP-107) . . . were attacked by three planes in rapid succession. Her gunners and those of the GOODHUE combined to explode one in mid-air. A second, after ricocheting between her starboard and port kingposts, smacked into TELFAIR’s bulwark, then careened into GOODHUE’s cargo boom, smashed her after 20-millimeter gun tubs, and joined his compatriot in the sea.”

The valiant little ship TELFAIR earned one battle star for World War I and three battle stars during the Korean War.

But even the TELFAIR’s days were eventually numbered. Her crew in her later years affectionately called her the “Tremblin T” because of a shaft vibration at high speeds.

They had a funeral (decommissioning) for the Telfair in 1958 but resurrected her in 1961 for more service. They finally put her to sleep for scrap in 1968.

But TELFAIR had another interesting side and it wasn’t that of a warring ship. She indeed lived up to her motto: “AD OMNIS PARA-TA” Prepared For Everything.”

It was also a comedy ship. TELFAIR made it to the movies: “Another fact of interest, the USS TELFAIR and crew starred in the movie, ‘Francis in the Navy’ with Donald O’Connor, Jim Bakkus and Martha Hyer. Also part of the scenes were used in ‘Aweigh All Boats’. (info provided by Marian Hazzard). This is one of the first movies that Clint Eastwood was in.”

Her record was to be envied:

“During World War II and the Korean conflict, TELFAIR won the following awards and ribbons.

The Asiatic-Pacific with 1 star

She was sold for scrap iron in 1968, her final funeral, but her spirit lives on and she does proud the county she is named for. When the boys of Jacksonville and Milan and China Hill and Workmore and McRae and Helena and Lumber City and Towns and Scotland and other communities in the county sit around and talk about their old Navy days they can now included in their memory banks the fine contributions of TELFAIR, the little ship that established one of the finest records in the U.S. Naval History.

Credits: “Salute to USS TELFAIR, APA-210/LPA-210”; Marion Hazzard for his info on the ship in the movies; info provided by other crew members of TELFAIR; other sources.