No one was quite sure where it came from or how it came to be there. And no one was certain what it was. When the Pioneer Historical Society assumed the responsibility for the Old South Georgia College Administrative Building in 2010, the item pictured above was one of many items that were stored in the facility. Members of the Society’s rehabilitation crew, while crawling around the basements and attic, and going through the myriad of items stored in the facilities many rooms, nooks and crannies, were able to identify almost all of them. But the item pictured below defied identification. It was certainly well made, appeared well used, sturdy and heavy yet mobile. The crew was continually searching for its identity. Two questions were asked of anyone that stopped by to visit and to check the rehab progress. The first question was “how would you change the lights in the auditorium’s ceiling”? The second question, in reference to the pictured item, was “what is this”? 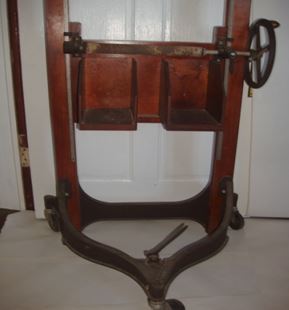 At every event held in what had been transposed into the Telfair Center for the Arts the Center’s crew would ask members of the audience, and sometimes even the entertainers, “what is this”. No one knew. The MC at events would ask that members of the audience to stop by the lobby during intermission to look at this unidentified item. There they would be asked “what is this”? There were birthdays, reunions, pageants, celebrations, open houses, recitals, seminars and a load of performing arts events.  Always the same question. Still no answer! One of the more inventive members of the crew took to telling anyone that would listen that this item was used to raise the music conductor to above stage level where she (always she) could be better viewed. Quite a few folks humored this individual and failed to question this preposterous tale. Well, maybe one or two of them may have been just a wee bit gullible. Still unidentified, “it” was now fondly referred to as “the infernal contraption”.

During the December 2014 Christmas Night Out, and in growing desperation, it was announced that anyone that could identify the “infernal contraption” would be awarded a lifetime membership to the Pioneer Historical Society. Even given this highly prized incentive – you guessed it, “what is it” remained unanswered.

During December 2014, the Center hosted an area Georgia Arts Council Seminar. During a break in the seminar a number of attendees were introduced to the “infernal contraption” and were reminded that anyone that could identify it was to be awarded a Pioneer Historical Society lifetime membership. Two attendees,   representatives of the City of Douglas, took the challenge to heart and amazingly solved the mystery. Blondale Thomas and Georgia Henderson became lifetime members of the Pioneer Historical Society during the Society’s monthly meeting on 4 February 2015. Only one previous lifetime membership has been awarded. That awardee was made to Shelly Hamilton Schlenz in 2007 for her efforts on Telfair County Bicentennial Celebration.  Blondale and Georgia received Certificates of Lifetime Membership that were designed by Lydia Fussell.

Pictured below is the correctly identified “Portrait Studio Camera Stand”. 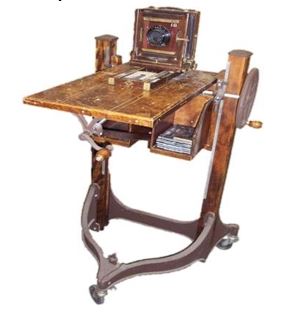 The Telfair Center for the Arts is a project of the Pioneer Historical Society, Inc. a 501 (c) (3) non-profit organized to preserve the history of Telfair County and to promote the arts among its citizens. The Center is the adaptive use of the rehabilitated South Georgia College that was constructed in 1892. The Society was incorporated in 1976. Membership dues were $10.00 then and remain that today. Truly a bargain! The Society meets the first Wednesday each month at the Little Ocmulgee State Park lodge. Lunch begins at 11:30am followed by a program and business meeting. All are welcome.

The Pioneer Historical Society is a 501 (c)(3) organization whose  mission is to sustain the interest of the county's citizens in the preservation of the county's history and to encourage interest in the arts.  The Telfair Museum of History and the Telfair Center for the Arts are also integral parts of The Society. The Pioneer Historical Society meets the first Wednesday of each month at 11:30 am at the Fairway Restaurant at the Little Ocmulgee State Park. After a dutch meal, a short program of area interest is presented after which a short business meeting is held. Everyone interested in the history of Telfair County and the surrounding area is urged to join. Memberships are $10 per year for individuals. Family and business memberships are available. For more information contact Robert E. Herndon, President, at 229-868-2520 or by email at rherndon2002@yahoo.com. You are encouraged to visit our website at www.phshistory.org .